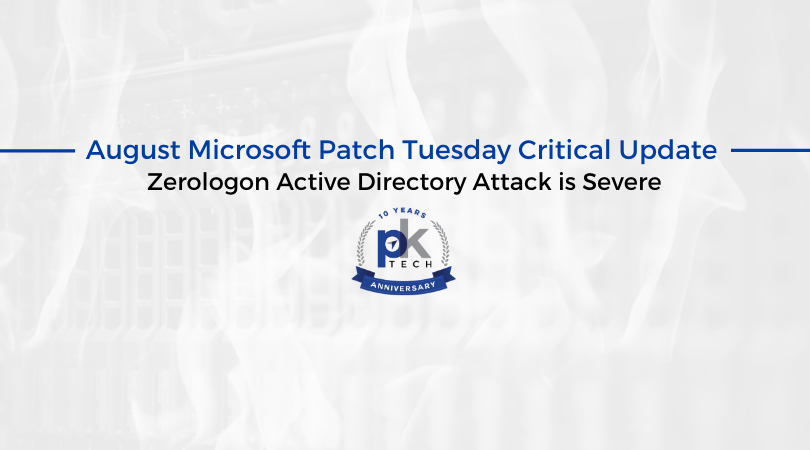 Microsoft’s August patch Tuesday Windows Updates included the following gem that’s described as “one of the most severe bugs ever reported to Microsoft”.

The Zerologon attack targets Microsoft’s on-premise Active Directory product, which is used by 90%+ of all organizations worldwide.

This attack takes advantage of a weak cryptographic algorithm in the Netlogon service and allows an attacker to:

In summary, they could take over as Domain Administrator and have complete control over your most critical IT service — Active Directory. An attacker could lock you out of all your domain-joined computers and servers and hold you ransom, for example. This is a 10/10 CVSSv3 vulnerability severity score (or as we call it, the oh-s**t score).

However, an attacker would have to run malicious code on your internal network for this attack to work. An individual computer or server would have to be attacked successfully, e.g., a staff member clicks on the wrong link in an email and gets infected. Next, if/when that device was on the same internal network as your Domain Controllers (e.g., on the non-guest Wi-Fi or network jack plugged in at the office, or over VPN), they’d attack laterally, and Zerologon attacks your Domain Controllers.

Now for the good news — Microsoft already has a temporary solution in place, BUT it requires an IT Administrator to intervene manually.

Instructions for Your IT Company:

1) IT Administrators need to install Microsoft’s August’s Monthly Rollup on all Windows Domain Controllers and reboot. Your IT Company should be doing this for you automatically within 1-2 weeks of patch Tuesday.

2) Follow Microsoft’s guide to blocking this specific insecure connection, How to manage the changes in Netlogon secure channel connections associated with CVE-2020-1472.