Investing in IT is Important: Just Ask Southwest Airlines 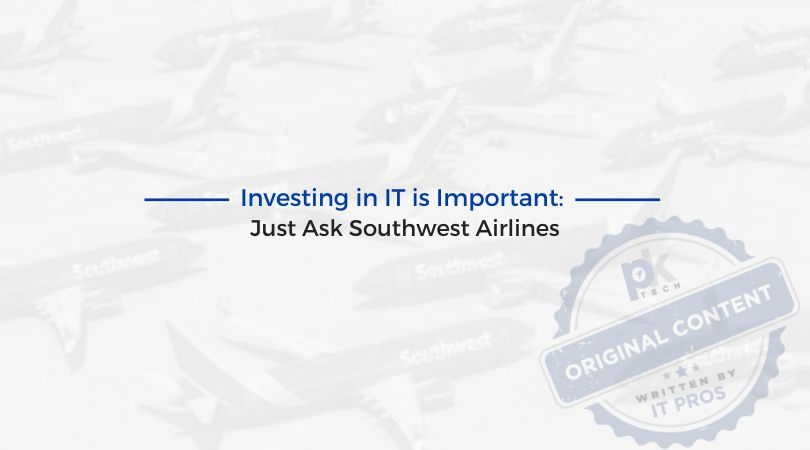 Blame it on the holidays, staffing shortages, or 100-year winter storms, but here’s the harsh truth: Southwest Airlines’ epic travel failure this December was mostly the result of outdated technology.

For the IT skeptics out there, let’s look at the consequence of outdated IT infrastructure and Southwest’s failure to invest in the IT needs of their current operations.

The Effects of Failed IT

While the headlines read that thousands were stranded in the fallout of the Southwest Airlines travel disaster, let’s look at all that was truly affected. Of the 2,813 flights canceled in the US on Wednesday, December 27th, 2,509 were Southwest Airlines flights. Other than just canceled flights, Southwest had massive issues with baggage loss and an inability to rebook passengers in a timely fashion. Their failures were to such a great scale that they attracted the attention of the US Department of Transportation. That’s when you know it’s bad!

Their outdated IT systems were able to cancel flights but failed in several regards:

Not only did Southwest create a logistical nightmare, but their IT systems were also so outdated that they couldn’t even solve the logistical problems after they were created. What’s more is the cost to the airline superpower. Not only will Southwest be reimbursing passengers for canceled airfares, but in some cases, they are reimbursing for other travel expenses related to flight cancellations. The CEO of Southwest Airlines also wrote a personal letter offering affected passengers 25,000 Rapid Rewards mileage points as a gesture of apology. Imagine the cost of reimbursing the passengers on 2,509 canceled flights–that’s a big number of passengers and an enormous cost.

What Other Airlines Did Right

Wait, why was Southwest Airlines the only airline to cancel flights because of the storm? They weren’t – other airlines did, in fact, cancel flights, but with updated technology systems, they could untangle the logistical nightmare much more efficiently and effectively.

Delta recently switched its operations to Amazon Web Services, while American Airlines announced last spring that it was migrating to Microsoft’s Azure platform. Both platforms worked to cut operations costs and boost efficiency for the airlines. On the other hand, Southwest was still using systems from the early ’90s.

No matter your industry or business size, IT matters. Are we biased? Sure. But we can also point to endless examples where failing to update IT costs businesses big time. Southwest Airlines is a glaring example of this. The effects on their bottom line were massive – but the effects on their customer base were arguably more significant. Customers missed the Christmas holiday with their families, lost baggage with holiday gifts and sometimes medicines, and were left stranded in multiple airports across the U.S. What Southwest lost in their IT fiasco was more than just money – they lost customer loyalty.

IT upgrade costs don’t go away if you ignore them, they accumulate… with interest.

As we kick off a new year, consider how your business is prioritizing IT. Understand that failing to do so will hurt your profits and your customers. To get started with our managed IT services, contact a member of the PK Tech team here.