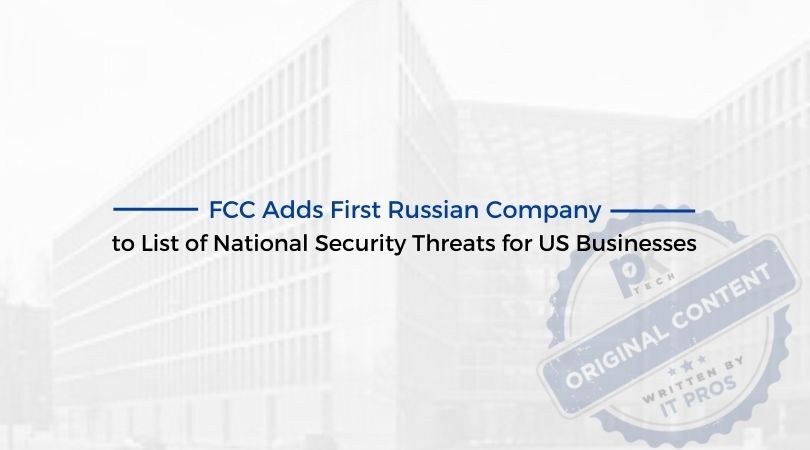 Kaspersky recently became the first company to be added to the US Federal Communications Commission’s list of entities that pose an “unacceptable risk to US national security.” You can view the complete list of entities here.

What does it mean if you’re on this list?

In short, US businesses are forbidden from using federal subsidies provided through the Federal Communications Commission’s (FCC) Universal Service Fund to purchase products or services from companies on the list.

At the same time, they added Kaspersky, the FCC added China Mobile International USA and China Telecom to the list of US national security risk entities.

The predetermined threshold for adding foreign companies to the list works to help secure US networks from threats posed by Russian and Chinese-backed entities that attempt espionage and other harmful threats to American businesses and government operations.

Despite being added to the list, Kaspersky publicly responded they “remain ready to cooperate with US government agencies to address the FCC’s and any other regulatory agency’s concerns” (source). Accusations that the FCC made a political move in light of Russia’s invasion of Ukraine did not sway the FCC’s final decision.

The FCC’s decision follows a history of suspicious activity by Kaspersky. Russian intelligence allegedly used their antivirus software to steal classified documents from the NSA in 2017. Though Kaspersky denied the accusations, the former alleged breach did not help their current case.

The US government and associated cybersecurity agencies remain extra vigilant to foreign cybersecurity threats in light of what is going on in Ukraine, Russia, and worldwide. Best practices for your business remain to closely follow national recommendations, as well as any other recommendations of your organization’s qualified IT security team.

If PK Tech can support the IT security of your organization in any way, let’s chat. Get in touch with our team here.